Anyone remember that? It's a real-time strategy, year or two older than Original War.

Pretty good game if I may say so. Has some interesting concepts, good depth in gameplay due to research of technology, capturing enemy subs/buildings, noticable differences between factions and even stuff like mines, mobile defense towers and weapons of mass destruction.
Also the aliens look kinda cool.
I managed to run the game on my Win7 64bit, with a few workarounds (had to end explorer.exe to fix colors and the game has low fps unless I change it's resolution in the mission, then it works fine until I load a new mission). 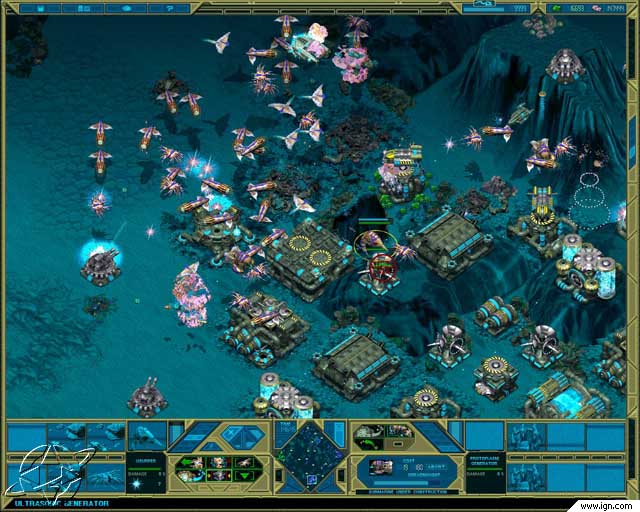 So, where does the "bad luck" come in?
This game is an abandonware.
I put some effort into finding information about it, and from the look of it, it is no longer sold by anyone.
Steam, GOG, or anyone else don't sell it. Only way how you could get it is to buy used copy on ebay (which is quite pricy for such an old game) or pirate it.

The publisher - Strategy First, doesn't even acknowledge on their site that they know anything about this game's existence. They sell there all their games, but Submarine Titans is not there.
The developer - Ellipse Studios, is nowhere to be found. They had a website, but that seems to not work anymore. Only information I was able to find about them I could quote from here http://www.ign.com/companies/ellipse-studios:


Ellipse Studios is an Australian based game development company who specializes in creating real-time strategy games. Two games they have developed in the past are Ancient Conquest & Submarine Titans.

There is also their contact information, but I don't have the curage to dig deeper


Okey, and what about players? From the look of it, the game is not play much. I found only one fan site (http://www.submarinetitans.com/), there is not much information anywhere, only some on moddb or gameFAQs.
I tried to put that fan site into waybackmachine.org and found out that this url was used for a web site about that game in 2000, then in the next few years it probably has been taken down and recently (July 2015) someone used that url and put up this little site on it.


So, next time you will think about how underrated Original War is and how rough it had in the world, remember this game. It had it worse.

Interesting game, shame it ended like other forgotten ones. Just today I tried to find Beach Life on Steam or GOG, but also with no succes.


Hostile Waters: Antaeus Rising - one of my favourite games of all times suffered similar fate. It was praised basically by all reviewers that put their hands on it, but lacked skirmish and multiplayer, as the multiplayer patch was never finished and it required a powerful computer, as it's graphics were very good for 2001 standards. With little advertising, it was quickly forgotten and their creators, Rage Software, bankrupted 2 years later.

It was a hybrid of RTS and vehicle simulator with very interesting mechanic of customizing vehicles. You chose a vehicle, selected a weapon and then put differend addons, like armor, shield, faster ammo regeneration, that were represented as cards, on a vehicle's outline. Different vehicles had different slot configuration so it was kinda like puzzle, how to get the best set of addons.

You could put soulcatcher chips into your vehicles with sth like AI's based on minds of soldiers that died in what was thought to be the last war on Earth. You could then command those vehicles like in a strategy game, or you could get into the vehicle yourself and fight and set other as wingmen to assist you.

You can still buy this game, but I recommend other source than Steam, maybe gog.com, becouse Steam version don't support larger widescreen resolutions. (And retail version does, what shows how steam cares for old games they sell - they sell some broken unpatched versions)

In fact, when compared to some other games, OW is not in such a bad position right now: I agree, Original War had quite a good luck at the end. It is still sold, it had at least a small active community at all times and it is praised by reviewers on Steam.
And even that older playes are moving on, it is still played. According to what Sali said to me, about 50 people downloaded Throwback mod on Steam only. That is quite a lot.

But there are always some games which lies forgotten. Usually they are mediocre with little diehard fans but sometimes they are real gems.
I think I hate the most when a support for game is frozen because companies can't get on common ground with each other. Like in case of Aliens vs Predator 2. There are multiple companies involved, god knows who actually owns it, it's a mess. And of course, you can't buy it

I guess the same was the case for Submarine Titans, developer and publisher had an argument, developer kept the rights but couldn't publish the game again on his own, and now it's abandoned.

Good thing we have the internet to keep these games alive.


Hostile Waters looks interesting, I might check it out. Would love to try out Sub Titans in multiplayer though

, even if it would be just to see whether it works or not.