What's more, Sali and Stucuk suggested the tournament to be played on the brand new WIP patch, with developmental version of SGUI. Stucuk has decided to speed up his work on the patch to make it possible for contestants to test out, and show the world brand new Original War user interface!

Thanks for Sali and Stucuk for their hard work! Live streams on their YouTube channels will provide: Bren, Dragon5fly, Jakes, Nefarem, and Thorgall!

Combining fun with useful, we will be able to carry out in-depth tests of the game, and you will see your favourite streamers in action! The following people agreed to participate: Bren, Dragon5fly, Jakes, Nefarem, Sali, Stucuk and Thorgall. Their fights will take place in parallel due to time constraints.

Tournament rules: The list of fights is available at the address: https://docs.google.com/spreadsheets/d/ ... z0nOpVFwY/

We wish the contestants successful fights and the audience a wonderful experience with your favorites streamers! 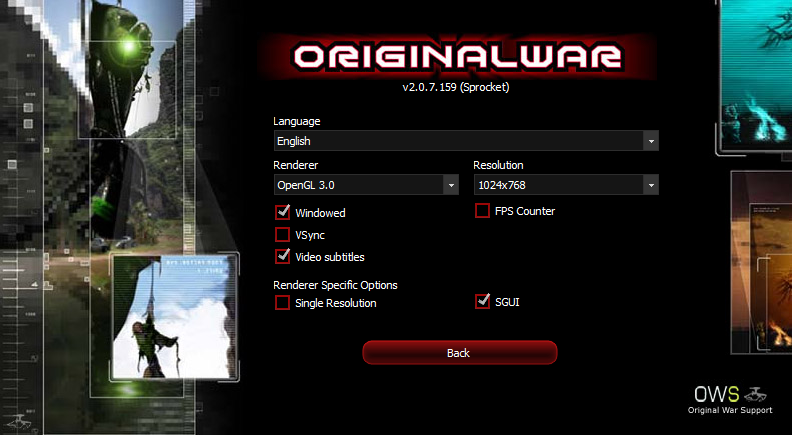 Another way is to start the game from the file "OwarOGL_SGUI.exe". - with possible additional parameters entered in the address bar. For example, the address of a shortcut for a game launched in OpenGL using SGUI for 1920x1080 resolution in the window will look like this:

or for a frame window:

More information about the game parameters can be found at: https://wiki.owsupport.com/index.php?title=Parameters

The times indicated in the match timetable are information hours and, of course, if an opponent is available earlier, the game can be played earlier.

The list of fights is available at the address: https://docs.google.com/spreadsheets/d/ ... pVFwY/edit

Note that this patch goes on top of the 30th patch.

After two days of interesting matches we reached the end of the tournament! After 42 fierce battles, in which as many as 7 players fought against each other, we were able to successfully select the top four players of the Original War Streamers Tournament 2019. Applause for our champions!

The final classification is as follows: Ladders of the tournament and records of all fights can be found at the address: https://original-war.net/articles.php?a ... rstour2019